It doesn’t seem like very long ago, back in 2009, we ran the Barry Roubaix for the first time and I won on a mountain bike. Fast forward 5 yrs and the race has completely changed. It grew from a mere 300 racers back then to now almost 4000! The race has gotten much faster too. You almost have to ride a cross bike if you want a chance at riding in the front group. The race has really become something special for bike enthusiasts in Michigan. It’s the first race of the year for most of us, which always brings with it the question of weather and course conditions. The course was actually in pretty good shape. A few muddy spots, but other than that, it was dialed.


The roll out pretty much went as expected. I tried to tuck into the middle near the front of the pack and held my position. My plan was to stay right up near the front and be ready for any attacks or sketchy sections of the course where a crash or split might occur. Once we hit the dirt roads, I tried an early move off the front but the group chased and shut it down. About 5 miles into the race, we began picking up riders from the earlier waves. It was kind of a real cluster at times, but we dealt with it. I believe the initial split of about 12 riders came after a long section of churned up peanut butter mud. I heard there was a crash, but I didn't get the details of how the split happened. The 12-ish of us drove the pace on the pavement and worked on separating ourselves from the rest of the field. By the time we reached the turn off for the 62 mile course, we were away.


From here on out, it was a matter of whittling the field down to a more manageable size to sprint against in the finish. I felt strong, really strong, however, every attack I tried was quickly countered by the group. I had a target on my back. Seemed as if the group would let others ride off the front, but not me. As soon as I made a push , they were on it. So I decided I was just going to ride in the top 3 spots, and patrol anyone who tried to roll of the front. It was going to come down to a sprint. As the race went on, we whittled it down to 9, then 6, then with one more move on the pavement run into the finish, there were 5.


Shawn Adams led us into town with Adam York glued to his wheel with me sitting 3rd wheel. We made the last couple of turns and I hesitated when Adam made a push on the downhill right hander. It was wet, and it took me for a loop. But just like that they had a couple bike lengths on me. We made the last left hander and the push for the line. It was enough for 4th out of the 5 man group. A little frustrating because my legs felt so good on the day, but that’s bike racing. Kudo’s to Steve Broglio for pulling out the win. Sprints are still new to me, and it’s something I’m not used to. But over time, I think I will eventually be able to develop the skill. It’s not just about power I learned. It has a lot to do with how brave you are in those last few turns towards the finish. And let’s be honest, nobody wants to hit the pavement going 25mph, so maybe 4th isn’t so bad. I’ll take it and go home happy. 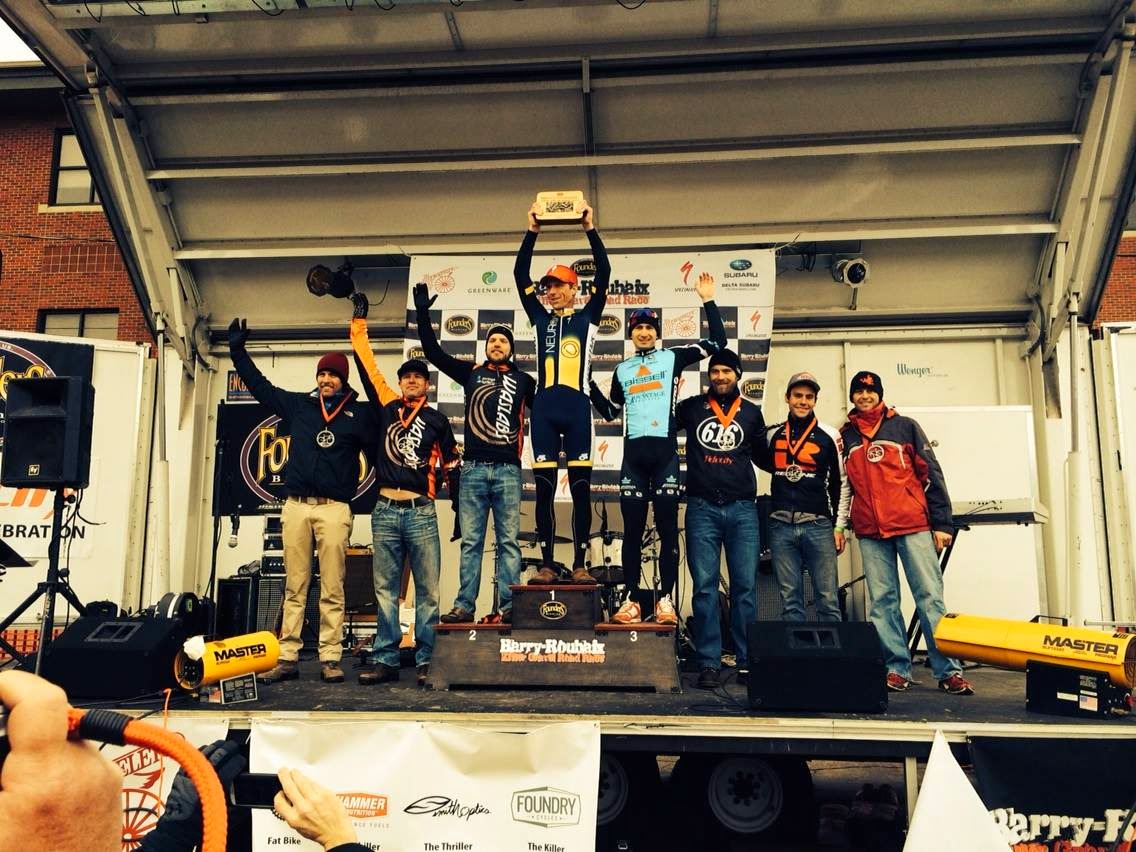 After the race we hung out with the guys from 616 fab and Velocity Wheels. Both sponsors have given wonderful support and they also happen to make really cool products right here in Michigan. It was great having them there and for them to be so stoked about my finish. I couldn’t be happier. So here’s to the kick off of the 2014 racing season in Michigan. Hope to see you out there making the best of it!
Posted by simonster at 8:30 AM