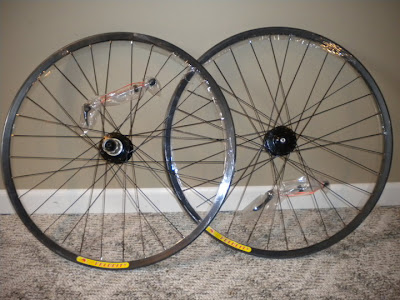 I have a pair of 26" Velocity VXC wheels. They're the standard 32H disc hubs. The website has a claimed weight of 2060 grams. They're brand new, never taken out of the box. $300 or best offer takes them. Great set of spair wheels to train on. They come with Skewers too. Here's a link to the website with the info. email me: mikesimonson at hotmail dot com

http://www.velocityusa.com/default.asp?contentID=522
Posted by simonster at 10:31 AM No comments:

Wow, it's been a while since I've updated. Well, 2010 is well underway. I'm all fixed up with Gary Fisher again for 2010, as well as Notubes, and a couple new sponsors this year with SRAM and some help from Crankbrothers. With this combo, I should be able to make one of the lightest, most bad ass 29ers on the planet!

The training has been going pretty well. I got a nice block in over the holidays with little Stewy, and with the MLK holiday and my regular Friday off, I'm working on another big block this week. I switched over to the paved roads instead of my typical dirt rds as the dirt is still pretty moist with the higher temps. Art's keeping a close eye on me and trying to keep me healthy as possible. He's been a great coach, and a great friend.

Looks like Barry Roubaix will be the first race on my calendar as Southern Cross was postponed to a later date I can't make. The beird will have to grow till March now. I'm full on for the NUE races starting with Cohutta. I was also thinking about Dirt Sweat and Gears 12hr in TN too. Lots of cash there up for grabs.

On another note, I turn 30 years old this week! Egads! I always said I was going to something crazy for my 30th, but I'm not sure I have the energy for that right now. I'm still recovering from New Years... thanks to the Collins' ;-)

Well that's it for now. Stay healthy and get ready for another awesome season of mountain biking!
Posted by simonster at 9:32 AM 2 comments: