Made the big 30 minute drive yesterday out to one of favorite summer classics, Pontiac Lake XC. I consider it to be my home course. I've been riding there ever since I was 14 years old. I did my first XC race there. It was a Paul Bunyon in January I believe and it was extremely muddy. I DNF'd. A lot has changed since then. The course has undergone many changes and improvements. In my opinion, I think it's one of the most technically difficult courses in MI. It's 10 miles long and has about 760ft of climbing per lap. There's lots of fast challenging downhills and some tough steep climbs. I chose to ride the Trek Top Fuel and it proved to be the right choice because... I won! It's amazing how full suspension keeps ya so fresh on bumpy courses. Congrats to my good friend Joe Brzuchanski on the Bells MTB Team for sticking it to the end in 2nd place. He rode a good race.

This weekend is the Shenandoah 100 in Virginia. It's a beast of a course at 100 miles and 12,000ft of climbing! The first 25 will be fun, the last 25 will be grooling. It's good for me though. I gain a lot of experience and I learn a lot from riding with some the best riders in the country. After 100 miles you pretty much know what you're made of. You know your strengths, your weaknesses, and your limits as a cyclist. I recomomend everyone try one at least once.
Posted by simonster at 5:27 AM 3 comments:

What a fun weekend. The 7 hr drive was worth it to experience Marquette at least one time this summer. The weather was pretty good, except for the downpour 30 min before the start, which turned out to be a blessing as the course was the best it's ever been. 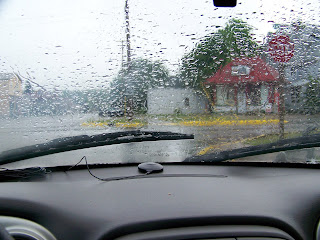 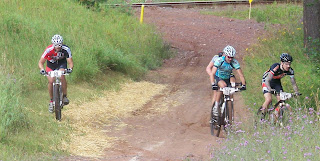 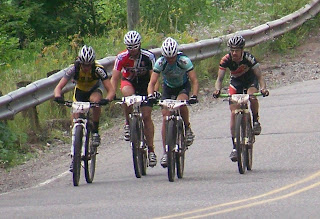 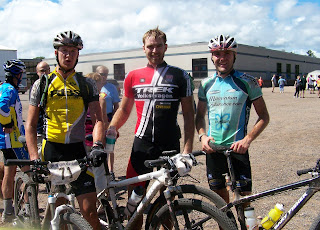 How it unfolded:
The controlled roll-out suprised me. I almost ran into the back of the motorcycle. Oh well. Up and over the Luge climb with Brian Matter by my side. We pulled out a group of 6. It was Me, Matter, Swanson, Anderson, Marko, and TJ. Matter flatted in Ishpeming, then Doug went down in the puddle of death, which left the 4 of us to battle it out. Soon after, TJ attacked super hard on the power line climbs and I could tell he was feeling good. All was going well until we got to Misery Hill. Ugh. I was put into difficulty on the hike-a-bike. I chased through all the rough stuff and latched back onto the group when the trail flattened back out. After a discussion of the prize list breakdown, it was time to get down to business. From there on out it was all shadow boxing. This is the fun stuff. It's what racing is all about. We were all testing each other here and there on the little rollers. I wasn't sure who had the best legs. Finally on the long paved road section, I knew it was time to go for it and lay out all my cards. I tested them a couple times on the pavement, but nobody was willing to counter-attack. As soon as we got back onto the trail, I attacked on the downhill and got a little 10 second gap. I kept telling myself, "you can do this! Go! Go! Go!" I thought back to Iceman from last year when Brian rolled away with 10 to go and I just kept that thought in my head every time I looked back and saw TJ chasing. It was the perfect mindset as I was able to hold off TJ and roll in for the win! A little more tactical than in the past, but a win none the less. It seemed that anyone of us could have won the race out of that group of six, but a little luck with good timing and patience proved to be the key. 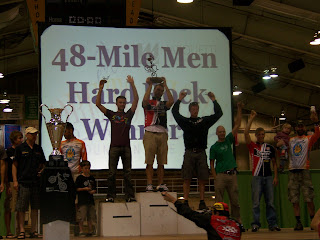 Next up Shenandoah, followed by "The Chequamegon." My goal is to just finish that one in my lifetime.
Posted by simonster at 6:09 AM 3 comments: