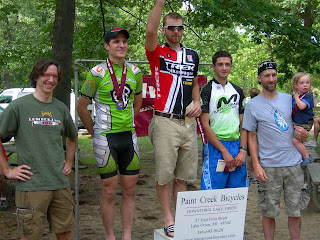 I woke up to the sounds of rain on the roof last Saturday morning before the start of the Stoney Creek Marathon race in Rochester MI. I wasn’t really sure if I wanted to race in the mud, but the FOMO (Fear Of Missing Out) kicked in and I had to be there. I threw on the Bontrager mud tires and the Fuel was prepped.
A blow of the whistle and we were off. Lummis took the whole shot and lead most of the lap before I took over in the singletrack. Christian went to work on lap 2 which whittled it down to just me, Christian, and Randy Laprarrie. Christian punched it hard a few times till it was just me and him. Then, he punched it one more time before we got to the uphill singletrail and he was off on his own. I thought that was the last time I’d see him, but much to my surprise I saw him on the side of trail heading into lap 3. I think he caught a flat. In the meantime I put it on Auto pilot for the rest of 4 laps and brought home the first W of the year followed by my training partner Greg Kuhn in 2nd. Nice work Greg!
It was nice to see all my friends again. I think we all suffered together with the heat, the mud, and the humidity. It made for a tough race and I was happy to finish.
From there we took the party over Keith Riege’s for some relaxation on the deck along with some good old fashioned grilling. We had a fun time well into the night and we made some new friends too.
Thanks goes out to all who support me in this mountain bike racing endeavor. I couldn’t do it without you guys!

So I accomplished something very special this week. I biked to work and back an entire work week! 19 miles both ways puts me at 38 miles a day in approximately 2hrs 15min, unless I take a deviation on my way home. I did the math on the gas savings and it comes out 27 dollars a week with gas at $4.15 a gallon. Woohoo! That buys me and Mitch a celebration dinner tonight! In a way, it almost feels like I’m getting paid to ride my bike.
It’s a great route too. It’s mostly all rail trails. I start out bright and early at 6AM as our neighborhood connects right to the Polly-Anne trail for the first couple miles. From there I take back roads down to Lake Orion where I pick up the Paint Creek trail which takes me on a scenic route all the way to Rochester. There’s a nice little connector trail which leads behind the library and over to the Clinton River trail. I head West for another few miles and the trail drops me off just a few hundred yards from my work front door.
I’ve discovered there’s a whole sub-culture of bike commuters around here and I’ve run into a few old friends. Just this morning I ran into a friend that I used to work with when I was at Chrysler.
With no showers, baby wipes and Right Guard have become very useful, and I’m sure everyone here at the office appreciates it too. Every minute of the commute is worth it though. I highly recommend bike commuting for anyone looking to save time, or money on gas. It’s a very rewarding experience.
Posted by simonster at 12:01 PM 3 comments:

I think the best word to describe 100 mile MTB racing is "tough", and the 2008 Lumberjack was no exception. 100 miles of pure Michigan singletrack. With this race being in my home state, I really wanted to give the full timers a run... well for at least one lap. I took the whole shot and was first to the top of Big M mountain with Jeff Schalk glued to my wheel. I continued to push the pace for the entire first lap. At one point I was all alone off the front just after the epic "swamp" section. It was the craziest thing I've ever seen on a mountain bike course! The water was up to my knees in some spots and lasted what seemed like a 1/4 mile. My efforts proved to be too much too soon as I faded after the first lap. The good thing is I felt the best I've felt all year and it's something I can build on! Another plus was I got to race on my Top Fuel for the first time. It was definately an awesome bike for the course. Thanks goes to Chris Shaw and the people at Trek for supporting me this season!


The most rewarding part of the weekend was spending time and getting know better my father in law Dan O'Dea. We left together on Thursday after work in the motorhome. I am now completely spoiled and road tripping it again in the PT Cruiser will be tough to swallow. A big THANKS goes out to Dan, and the entire O'Dea family for taking care of my every need for the entire weekend. It made a huge difference! 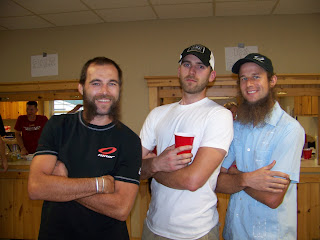 Two new friends of mine DJ and Fuzzy at the after party. I've got some work to do on my beard if I want to catch up. 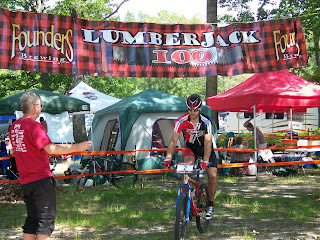 This is me at the finish line with Rick Plite. He put on a very well promoted event and brought some stiff competition into Michigan from all over the country. WELL DONE RICK!

I had a great time racing in Michigan and it made me realize how much I miss all my racing buddies this year. It was good to see everyone again and I hope I can see everyone again soon. I'll do my best to keep everyone posted. Bye for now.

It's the middle of June and I've got a few races under my belt now. I trained more hrs in the off season than ever before. Couple that with 5 100+ mile races, three agonizing weeks of the flu, and you've got one tired bike rider... and it's only June! It's OK though. I've got tons of miles in my legs and all I need now is to back off and work on a little bit of speed for the rest of the season. My plan this year was to step it up, and try to take on some of the bigger events (NUE) with the toughest competition. So far it's been very tough. I spend most of my time trying to recover at my desk from 100 mile MTB races, and specific training during the week seems to just be a thought for now. But on the bright side, I'm 100% healthy, and haven't had any major catastrpohies this year so far. Well that's it for now. I'll keep the readers posted on the events of the next NUE dun dun dun... The Lumberjack! 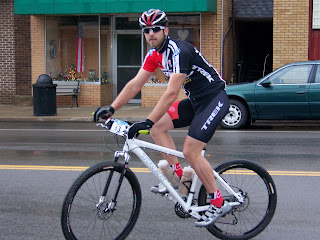 Start of the Mohican100. Rigid was probably not the best decision! Ouch!
Posted by simonster at 7:47 AM 3 comments:

Hello, and welcome to the Simonster Blog. I figured I would start out with a brief introduction and look into my life (for anyone who cares).

After a long period with Bells/Quiring, I switched racing teams this year and I'm now racing for the Trek Midwest Factory Team. The Bells Team was a great experience for me and Quiring makes great bikes. However, I felt this was a good opportunity to hook up with one of the most prominent professional MTB team in the United States. Oh yeah... and they happen to make great bikes as well! 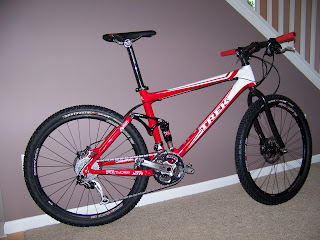 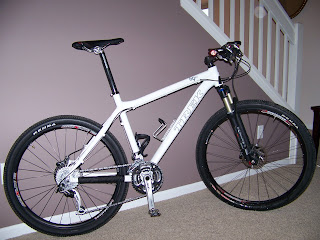 69er (hu-hu) for the faster point to point races ala "The Chequamegon", O2S, or Iceman. 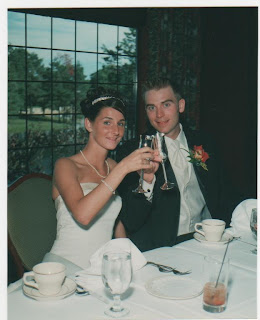 This is my beautiful wife Michelle. We've been married now for almost 4 years. She suuports me and my racing 100% and I couldn't do it without her. She works for Clarkston public schools and recently graduated with her masters degree in special education, (more sponsorship $$$!). 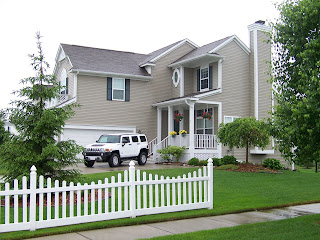 This is our home in Oxford MI. We've lived here for 3 years now. I like the location because I can ride to work on all rail trails, or head North and get away from the traffic. There's about 5 different MTB trails within riding distance from my front door. 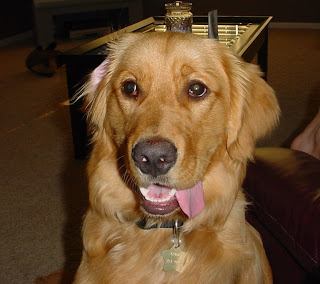 This our dog Buddy. He's full of energy and loves to go on bike rides. We got him when he was a puppy. Seems like he's always in a good mood. Nothing bothers him. 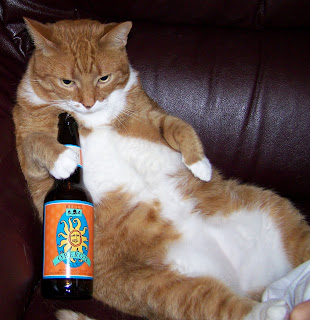 This is our cat Tigger. He sleeps constantly. He's about the most chill cat I've ever met. He weighs 20 lbs and can be seen most of the day just as he is sitting. We don't know much about him or what he does for a living, other than he lives on our couch. He's good entertainment though and he loves to nestle in your lap.