Battle at the Burg

Fall is my favorite time of the year. The mild temps and the dry air set up perfect conditions for bike racing, and this weekend was no exception. I decided to check out the 2nd running of the Battle of the Burg mountain bike race at Cannonsburg Ski Area as my sponsor 616 Fabrications is located only a stones throw away from the venue.


The Cannonsburg course is a mix of tight twisty singletrack with a lung searing climb to the top of the ski hill each lap, which means we get to drag race straight up the 25% grade 4 times at the end of each lap. Ouch! The course was pretty dialed, but technical enough to where if you tried to push it too hard, you would pay the price. Matt Schmuker did an excellant job with the promotion, and everything went really smooth. It's a cool event worth throwing on your calendar next year.


The pace set off fast as we made our prologue loop around the parking lot area, and it was Dan Yankus who led us through most of the first lap. He was ripping through the corners and using every inch of the course. I sat 2nd wheel. Heading into the 1st ascent of the ski hill, it was Scott Hoffner putting in a good push which saw my heart rate sky rocket. 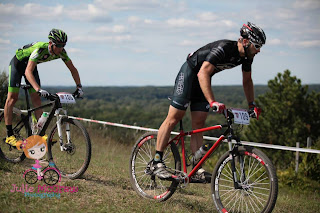 Derek Graham took over for the 2nd lap. He may have been pushing through the corners even faster than Dan was, as little gaps would open up that I would have to close back down. I was beginning to worry Derek might just ride away, but I held it together. Again, it was Scott to push the pace on the ski hill, but this time I felt more in control. A group of 4 formed for the 3rd lap. It was Scot Hoffner, Derek Graham, Alex Vanias, and me. Derek led us out.


Towards the end of the 3rd lap, I decided I was going to make a move on the ski hill and try to get away from the others for the 4th and final lap. As we approached the hill, I locked out the fork, made the left hander, and stood on it as hard as I could. The bike instantly jumped forward and my legs seemed solid. A few more hard pedal strokes, and the legs were still there! I downshifted, dug in harder, and threw the kitchen sink at it… the bike just kept accelerating. I looked back and I saw the gap opening, this was working! I downshifted again and could see the top of the climb coming closer and closer, and my gap was getting bigger and bigger, so I just decided to stand on it the whole way to top, and the legs held strong.


I kept on the pace heading into the 4th lap, but I could see Alex wasn’t far back. I knew if I could keep the gap going into the singletrack, I would be able to hold him off to the finish. I pushed through the singletrack, and suffered one more final ascent up the ski hill. Ripping down the back side, I knew I had it. That felt really good. Alex Vanias crossed the line in 2nd, Derek Graham 3rd, and Scott Hoffner in 4th. We were all really close.

I remember racing at Cannonsburg maybe 10yrs ago. It was Derek Prechtle who lit up the ski hill climb, and I remember thinking how cool it was that I was able to line up and race with him. It’s kind of ironic that I got a message from Scott Hoffner after the race detailing similar sentiments. Winning a bike race is always such a cool experience that never gets old, even after 12yrs of racing. I just feel so fortunate to live in a state where I get a chance to race with such cool competitors like Scott, Alex, Derek, and all the others who toe the line in Michigan. So here’s to the fall season of bike racing! Next up are 2 ultra cross races, Three Peaks in North Carolina, and Iron Cross in Pennsylvania, where I hope I can keep the streak alive. Thanks for checking in, and we’ll see you out there this fall.
Posted by simonster at 6:28 AM 1 comment: