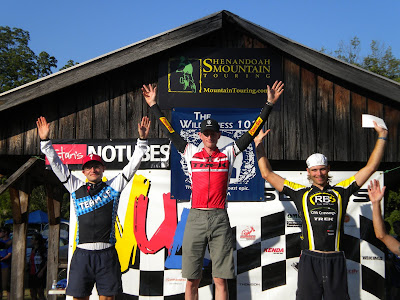 I have to admit, me and the Wilderness 101 course haven’t gotten along since we met years ago. Flat tires, broken wheels, broken chains, ripped derailleurs… you name it, this course eats bicycles. Needless to say, in 2011, it was time to settle the score. My bike was dialed and I came prepared with a new level of endurance and full heat acclimation.

The pace was fast right from the opening climb. Roger Aspholm pulled most of the way up and made all of our legs burn before we had a chance to warm up. There was a large group of us moving right along all the way to the first aid station where Drew Edsall attacked up the climb pushed the pace. His attacks were hard, and they continued all the way up the following climb until a group of 7 formed; Jeff Schalk, Christain Tanguy, Chris Beck, Drew Edsall, Roger Aspholm, Brandon Draugalis, and myself. We traded pulls and kept the pace high all the way up to aid station 2.

The big climb after aid #2 is where it all went down. It’s the biggest climb on the course and would take us almost 30 minutes to ascend. Christian went to the front, followed by Jeff. I lined up behind the two and knew it was only a matter of time before the attacks would start. It’s right where I wanted to be. The legs were still feeling good. Soon after, Christian pushed the pace and it was evident that his and Jeff’s power to weight ratios were slightly above mine, as well as Rogers. Instead of completely blowing up, I backed off and went into my own rhythm all the way to the top. Shortly after Brandon bridged up to me on the downhill. He and I worked together till we reached the next big climb on Sager Lake. I was able to break away from Brandon and bridge up to Roger on the climb. Once we reached the lumpy single-track at the top, I was able to break away from Roger. From this point on, I put my head down and pretty much rode solo in 3rd all the way to finish in 6:48.

Overall, I was pretty happy I didn’t have any crashes or mechanicals. I rode conservative on the downhills. I’ve learned the hard way you can’t always go careening into baby head rock gardens at 30mph with a 20lb plastic bicycle. I was also happy I had a clean shot at matching up against Christian and Jeff. It was my best effort. I couldn’t have done anything more on that day. It was all I had. The long steep climbs are something I’m going to have to continue to work on. I think I’ve definitely improved a ton this year. It’s taken several years and lots of hard lessons to hone the NUE skills, however I’ve managed to convert myself from a point to point hard man to somewhat of an endurance specialist. It’s August now and I’m not really counting on any major leaps in my NUE fitness before the season finale at Shenandoah. The tricky part now will be quickly converting myself back to a point to point hard man before the first Triple Crown. Congrats to Jeff Schalk for taking the win. It's going to be an interesting battle at Shenandoah to see who will take the 2011 series! I hope I have a front row seat to see the show.
Thanks for reading… now go out and ride that bike!
Posted by simonster at 4:54 PM 1 comment: