Well… the first BIG Michigan race of the year is officially in the books with Barry Roubaix. 616 Fabrications as well as Velocity wheels were sponsors of the race, so I really wanted to pull out a good result. My preparation for the spring started back in December, so needless to say I was pretty excited for this race. The temps were FRIGID, and course conditions were “sketchy” at best, but that didn’t stop almost 3000 people from attempting to slip and slide their way through the 62 miles of icey potted out dirt roads in Hastings Michigan. 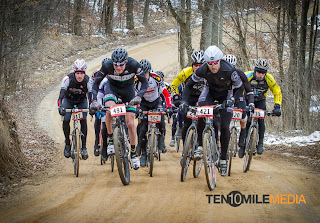 After a very cold warm up, and a little course recon, I headed to the start with my travel buddy Don Cumming. Before we knew it, we were off. A quick right hander onto the dirt roads, and we hit the first KOM about 3 miles into the race. My plan was to start at the front and sag climb to see who was strongest, but no one came around me. Jordan Wakely and I pretty much went over the top in tandem with the entire 62 mile group in tow. The roads were down right treacherous! Ice and pot holes were jumping out at us everywhere, and carnage ensued as I could hear the crunching and sliding of bikes and bodies behind me. I knew I had to get back near the front ASAP, so I worked my way up and pretty much stayed near the front for the rest of the race.


Attacks were coming right and left. Justin Lindine flew off the front on the paved road section out near Yankee Springs and I almost thought that was the last we would see of him, until about 5 miles later when all of sudden he came raging back through the group! He must have taken a wrong turn. Dam, he was strong. Mike Anderson got on his wheel, and I got on Mike’s wheel as Lindine drilled it through the rollers. Lindine let up just for a second, and BAM! Anderson launched. I hesitated just for a moment looking for the group to counter his move, but it was a second too late. Anderson and Lindine, the two power houses of the race, had the 3 second gap they were looking for.


I didn’t panic though. I figured I would grab my feed at the aid station, then drill it to bridge. They were right there. But soon after the aid station, the entire group took a left, instead of a right, and we went off course. It was only maybe a ¼ mile but…  just like that, Lindine and Anderson were gone, and all the people that tailed off the back of our group got a free ride back on. Son of a bitch! From that point on, our group pretty much stayed together. I would say there were at least 30-40 people at one point. I must have attacked over a dozen times in an attempt to get off the front, but all it did was string it out and everyone would stay together. All the big hills were gone and there really wasn’t any other course features tough enough to break it apart again.


The group whittled down a little by the end, whether it be from people crashing into 36 milers, or just tired legs. We lined up for the sprint, and I knew I would probably end up somewhere near the back, which I did, at 13th place. A little disappointing, but I still had fun, and I didn’t crash or hurt myself, which is always a bonus, especially with the course conditions. The 616 bike ran flawlessly as well. I thought I had really good legs, and I felt super strong… Strong enough to ride with Anderson and Lindine??? Well, I’d like to think so, but we may never know. I definitely need to brush up on my road tactics.


A couple improvements could be made on the course. Maybe larger arrows on the course markings. When you’re flying downhill at 25mph on a sheet of ice, it was a little hard to decipher a small arrow at times. Also, I think the course might flow better if we rode it in the backwards direction. That way the defining features of the course are at the end, rather than at the beginning. It might make it more suspenseful.

Good thing is the legs are strong, and I have many more opportunities this spring to go for it. Congrats to Justin Lindine on the win. He deserved it. Next up is Paris Ancaster. A cool 40 mile point to point race in Ontario where I’ll get the chance to go up against Mike Garrigan and Jonathon Page. Wish me luck. These guys are just as strong! Thanks for checking in and hopefully we’ll see you out there on the roads this spring!
Posted by simonster at 9:32 AM 1 comment: