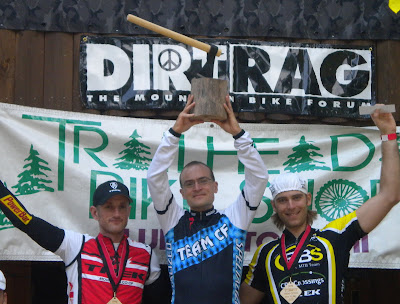 It's summertime in Northern Michigan... a perfect time and place for a mountain bike race. The sun was out, and temps were mild. I was really looking forward to this years edition of the Lumberjack 100. The competition seems to get tougher each year, as well as the course speeds. We're now racing a full 100 miles, and it's awesome to see everyone upping their game and pushing the sport to new levels.

The rollout in the beginning got going pretty quickly. I found myself burried 20 deep going into the singletrack but I quickly made my way to the front. There were lots of sticks covering the course and I tip toed my way around paranoid one of those bastards would end up in my wheel or drivetrain. I stayed near the front 3 positions most of the first lap and followed Robert "the rabbit" Marion. He kept the pace nice and steady for us as we naviagted the twisty singletrack. For most of the first lap, there was a train of riders. I'm not even sure how far back it went, but all the usual suspects were there, including a few new names which is always welcome.

I blasted through the feed zone and head out for lap two. We all stayed together until Christian put in a long attack on the Road Monkey section, which is a flattish lumpy section of twisty trail that beats riders into submission. I stayed glued to Jeff Schalks wheel and tried to remain as smooth as possible. By the end of Christians attack, it was down to 5 of us, Brent Prenzlow, Jeff Schalk, Christian Tanguy, Derrik Graham, and me. The pace sort of chilled out as Jeff took over for a while.

We blew through the aid station one more time and head out for the 3rd lap. My exchange was so fast thanks to my wife Michelle, and my in-laws, Dan and Sandy, that I found myself with a little gap. Shortly after Jeff and Christian bridged up and the game set match was on. I pulled over and let Christian go by. He immediately upped the pace and we saw Jeff struggling a bit. Christian just kept hammering until it was down to just the two of us heading into road monkey again. I was hanging in there, and the legs were doing it, but it was tough. Christian was on a mission. I stopped for split second to remove a stick in my wheel. I quickly bridged, but I was red lining. Christian kept the hammer down through the twisty trees like a joy stick. I seemed to be OK, but unfortunately you need to steer your bike as well as pedal it in mountain biking and it was right then where I clipped a tree and went down. I knew that it was over.

I quickly recovered and got back on the bike. I kept the pace up and avoided my typical meltdown. I thought for sure I had 2nd wrapped up, then sure enough, Jeff came rolling up on me with about 5 miles to go. Rat farts! I knew I had another battle on my hands. I was pushing the pace on the hills and I was struggling. He actually tangled up with a lapped rider at one point, which enabled me to recover a little bit. It came down to the final climb and Jeff punched it and dropped me, but I still had a little fight left in me. I dug super deep and thought, "if I could just catch him, I'd have a shot for the sprint." But Jeff held me off and we both crossed the line completely smashed and in the red.

I have to admit, I was a little bummed, but I'm happy with the race. I think it was my best NUE performance yet. I've never been able to stay with Jeff to the finish, so I think this was a breakthrough race. I feel like I'm getting more consistant and I've almost got the 100 mile gas tank developed. Congrats to Christain Tanguy for the win, and thanks to all the sponsors that help me out. The Trek 29er ran great! The notubes wheels and tires were the ticket and the SRAM components popped out the shifts flawlessly. Next up is Wilderness101, where I hope to keep the fitness rolling. Thanks for reading.
Posted by simonster at 5:30 AM 2 comments: 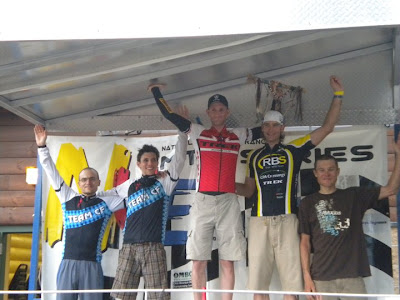 It’s hard to believe this was my 5th Mohican 100 and every one of them was just as hard as the other. This year was no different. The action got going right away with the $200 prime just ½ mile into the race. I made my way to the front and decided the $200 was at least worth the effort. After the un-godly steep paved climb, it came down to me and Robert Marion, in which he just edged me out. Dang! My lungs were burning, it was a full out effort. Ouch! Good thing we had a gap on the field and I was able to recover before heading into the singletrack. I launched from the left side of the group and pushed hard to be first into the shoot. This is one of the knarliest sections of trail in the whole race with steep off camber descents and I didn’t want to get in trouble. Soon after, Josh Tostado came ripping by. He was on rails going down the hills, and must have been holding onto a tow rope going up the hills! I prepared myself for the dis-mount of the early hike-a-bike, but Josh just started riding up it! So I followed and we cleaned the whole hike-a-bike. I thought “wow, that’s two bullets out of the magazine already. The last 25 miles is going to be misery.” A group of 5 developed. It was Schalk, me, Tanguy, Draugelis, and Tostado.

Josh continued to push the pace in the singletrack, and at one point I had to let him go, but bridged back later on. We blew through aid #1 and I grabbed two bottles. One managed to leap out of my cage. Shit, better turn around and go get it. For the next 20min or so, I dug super deep to bridge back up right before we hit the 2nd and 3rd hike-a-bike… bullets number 3 and 4. I was definitely in the red, but it was good enough to hang on as we head out onto the roads. Legs were feeling a little wobbly, but I recovered before we got to Mohican Wilderness. I attacked to be first into the singletrack, shortly after I heard yelling. Dam! I made a wrong turn and had to hike back up to the intersection. Chase chase chase, whew, I made it back on. A quick bottle grab at aid #3 and we were back on the trail. I noticed Josh was struggling a bit. We traded pulls and were working together pretty well as we made our way back out onto the roads. Jeff rolled to the front and began pushing the pace up the next climb. I followed and noticed we had a tiny gap over the others. I made my way around Jeff and put in an attack of my own (bullet 5). I was able to pull out Christian and Jeff. Shortly after I attacked again on the following dirt rd rollers and whittled it down to just Jeff Schalk and I.

We traded pulls and distanced ourselves on the horse buggy trail. Jeff was taking tremendous pulls that had me in my 39-11 (bullet 6)! I would pull through occasionally to give him a break, but I was starting to feel the fatigue. It’s a long uphill grade on the buggy trail, and there was no way to really recover. We pulled through aid #4. At this point, I was just content with sitting on Jeff’s wheel as long as possible to keep gaining time on the others. I finally popped as the mid day sun began to beat on us and Jeff rolled away like a runaway freight train. I was out of bullets and my magazine apparently only holds 6 bullets. He knew he had it and knowing it was going to fuel him all the way to the finish.

I began to ride very slow. The heat was oppressive, but I’d been in these situations before. I knew if I didn’t stop and just kept the bike moving, I had a chance to hang onto 2nd. So I relied on my training and experience to get me through. I stuck to my nutrition plan and actually stopped to get extra water which helped bring me back to life in the final singletrack section. Wait, just plain water helps? Who knew. I was glad it was over, and I was happy with my race! No crashes, and no mechanicals! Woohoo!

Thanks to my wife Michelle for the support, and to all the sponsors. It really makes getting on the podium a whole hell of a lot easier. Next up is Lumberjack in just under 2 weeks. Lets pray for some cooler temps this time around! See you there.
Posted by simonster at 7:34 AM 3 comments: