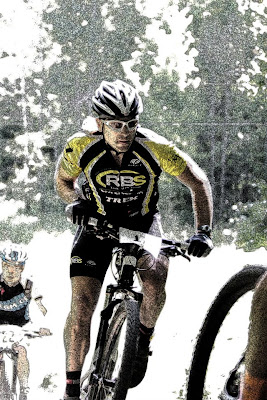 It's been 10 years of racing now, and I can't remember one of those years not including at least one trip over to the local trails at Stony Creek for a race. My training has swung full gear into high intensity mode lately to get ready for the fall season of shorter races. Mitch has gotton really good on the scooter and we're like a team out there on the dirt rds. However my body is still adapting. The workouts are really intense and I always want to quit at least once before we're halfway through.

There was plenty of crazy fast talent present for our local XC series race. Christian Tanguy, Mark Parmelee, and Greg Kuhn to name a few. We took off and a group of 5 of us were riding together. Kuhn, Tanguy, Parmelee, J. Whitbrot, and me. By the end of lap 2, it was down to just me, Tanguy, and Parmelee. During lap 4, Christian made a super charge through the roller coaster and got a gap on Mark and I. Without my full suspension Superfly 100, I wouldn't have made back to his wheel on the rough singletrack. It was down to just him and me as we made our way out the pines. I was feeling pretty gased from Christians's roller coaster effort, and just couldn't seem to fully recover. Christian rolled away at the end of lap 4. I was doing everything I could to try and recover and keep my tempo up. Finally Mark caught me about halfway through lap 5. The legs were feeling better, but still not 100%. I punched it a couple times, but Mark was right on me. We both rolled into the finish and I just sort of rolled in behind him. Didn't have much left for a sprint. Congrats to Christian and Mark who both rode strong races. It was a fun race, and a really good workout. I think my finishing time was 2-1/2hrs! That's a pretty long XC race.

Stony Creek seemed like the perfect fitness topper for next weekend at Shenandoah, the NUE series finale! I'm currently tied for 3rd place in the points, so it will all shake down by then end of this weekend between SH100 and Park City P2P. I'll take it easy on the intervals this week and give the body a little time to rest and adapt. Hopefully I can continue my streak on the NUE podiums! Thanks for reading.

Ore to Shore is a race that’s become near and dear to me over the years. Marquette is a beautiful place. The town atmosphere is relaxing and low key. I’d actually like to take a trip there sometime without the added stress of the race. The course has always been a good one for me, and my fitness is usually topped out this time of year. But for some reason, my legs just didn’t quite have that explosive power this year. Seems the better I get at racing the 100 milers, the more I struggle at the high speed point to points. Go figure. Perhaps next year I'll make the lottery into Leadville.

The action got started right away and as usual I went to the front for the loge hill ascent. However this time, Cole House came ripping by, as well as a few others. I was able to latch on as we crested the top of the hill. The group was huge. I looked back and I couldn’t even see the end of the train. I should have known right then and there, that with so many strong riders, any attacks were going to be futile. The attacks came periodically and I just tried to stay near the front. I was the first into the power line climbs and tried to push the pace, but I just didn’t seem to have enough strength. At one point I got gapped off the back when I bobbled in a sand put. However, Mike Anderson, Bryan Eppen and I were able to chase back on.

We hit the long road section and I decided to give it all I had on the last hill before it turned to dirt. I attacked hard, opened a little gap, but it wasn’t sticking. I tried again when we hit the downhill two track, but it just wasn’t happening. Shortly after Brian Matter pushed the pace and I was hurting. Finally Mike Phillips made one big push and I was off the back. I was paying for my attacks from earlier. I was content with just coasting in from there, but I latched onto Brian Eppen and Mike Anderson and borrowed their motivation to push to the finish ending up in 8th place.

I was kind of surprised I wasn’t able to hang in there for the sprint at the end. Normally the downhill run in at Ore to Shore is gravy for me. However, my training has been heavily geared around the 100 milers this year and I spent a lot of time focusing on riding more efficiently. The sporadic full power surges were a shock to my legs which have been trained for more steady long efforts. I won’t chalk it up as a complete loss though. It’s good to get a dose of that every once and a while, but I’m afraid the truth is my body has been converted to handle more endurance type events, and I’m not sure I can do much about it in such a short time frame before Chequamegon.

Therefore I’m switching my efforts back to endurance and focusing on the NUE season finale at Shenandoah 100 and…. Marathon Nationals! I’m super pumped about heading out to Oregon for the first time. I’m actually not too sad about missing Chequamegon. The start of that race has just gotten way too out of control. I mean I love any kind of bike racing, but I swear I fear for my life in the first 3 miles of that race! It's not safe at all. It’s a relief knowing I won’t have to roll the dice again this year on that start. I’d love to see the pro’s start at Rosie’s Field, but until then, I’ll pass.

Congrats to Brian Matter on the win, and perhaps by the time Iceman rolls around I’ll be able to get the leg speed up and make it to the finish with a chance. Thanks for reading and get ready for fall season of MTB racing. I’m pumped!

Posted by simonster at 11:53 AM No comments: