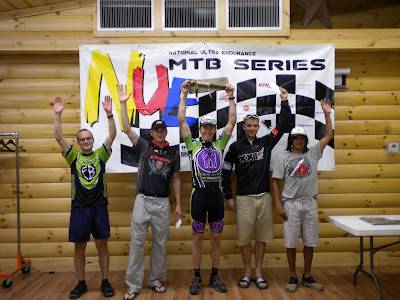 Stop #2 on the NUE calendar brought us to downtown Loudonville Ohio. Close to 400 people came out to tackle the hilly back country course which has everything from white knuckle singletrack, to epic hike-a-bikes, and even an Amish buggy trail. The weather was absolutely perfect with sunny skies and mild temps... although the competion wasn't so mild. Former Olympians, former world champions, and current and former national champions. It was a stacked field with high caliber mountain bikers.

The start rolled off rather quickly due to the $200 prime at the town outskirts. Jeff Schalk went for it, and I was close on his heels to make sure his sprint didn't turn into a full on solo breakaway. Hey, it's Jeff Schalk, if he gets away, you're likely never to see him again. We quickly re-grouped and I was sure to be right near the front before we hit the first section of singletrack right behind Jeremiah Bishop. He lead for the first 25 mile section of singletrack, and I made sure to stay glued to his rear wheel as well. The pace was fast and Jeremiah was cleaning the downhills like he was on rails constantly forcing me to bridge on the climbs. I hung tough and stuck with the leaders.

When we hit the long run-up near the end of the singletrack, I decided to go for an attack of my own! It lasted till the top of the next "horse pucky" climb/run where we all re-grouped before heading out onto the roads. Once we hit the roads, the road tactics were in full swing. I took my turns on the front and the big wheels and tires enabled me to pull the group along at warp speed whenever we went downhill.

The singletrack came and went, as well as the short punchy climbs, but the group was not breaking up! Finally as we all rolled into the final 5 miles of singletrack, things broke up. Schalk was the first one into the singletrack after a bar banging attack with Bishop. I sat 3rd as I watched Bishop carefully pick his moment to strike. He went around Jeff on the right side and that was the last we saw of him. With the pace quickening as Jeff chased, Tinker and Brandon lost contact which left just me, Jeff, and Christian. I slightly bobbled on the rocks, and Jeff was gone. Soon after, Christian got around me, as I bobbled again. The fatigue was setting in, but I pressed on thru the singletrack and finished 4th overall.

It was a break through race for me making it to the end strong with the leaders, and contending for the win. Last year it seemed like a struggle just to finish and I'm very pleased with how things turned out. Next up is LUMBERJACK100!!! It should be a good one!
Posted by simonster at 11:58 AM 7 comments: