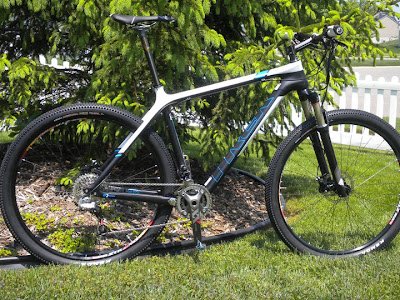 The first 100 miler of the year treated us with fantastic weather and pristine trail conditions. I have to be honest, after my performances at Barry Roubaix and Paris Ancaster, I was beginning to have doubts about my aggressive training plan this year. However, between Barry Roubaix and the weekdays leading up to Cohutta, I had managed to whittle 10lbs off my chubby winterized frame. It’s the leanest I’ve been in a long time. In my training, I could feel the difference on the climbs. It felt as if I was riding up the hills, rather than wrestling up the hills, so I knew the weight loss certainly wouldn’t hinder me at Cohutta with all the climbing involved.

We start up this 3 mile long paved road climb. The legs were feeling pretty good, the brisk morning mountain air was nipping at my ears and hands, but it warmed up quickly. A group of 8 emerged at the front as Chris Peariso pushed the pace on the 2nd half of the singletrack. We had, me, Chris Peariso, Jeff Schalk, Thomas Turner, Robert Marion, Andy Johnston, Chris Beck, and Christian Tanguy.

As we head out onto the fire roads, Patrick Mossler bridged up and joined our group, a mystery rider I wasn’t familiar with. There always seems to be one or two of them at each NUE. My legs were feeling good, so I tried a few moves off the front. Perhaps they’d let a large sized man off the front before the climbs… but no luck. Jeff would pull me back each time while the others sat on. We blew through aid station 2 and dropped a few off the group as we hit the steeper climbs. The course sort of undulates between aid 2 and 3. As we approached aid 3, Christain took a couple hard digs off the front which were covered by Schalk and I. We rolled into aid 3 and I got a quick hand-up and continued to push on. It was the only feed I took the entire race. I had maybe 30s on the others. On a short steep climb just after aid 3, Christian broke away from Beck and Schalk and got to within maybe 10s of my wheel, with 30s over Chris Beck and Jeff Schalk. I was pressing the pace on the long descent and holding off Christian, then the dreaded hiss started. Dam! I immediately went to work on fixing the flat as Christian went by, then soon after Jeff and Chris slipped by. But before anyone else caught up, I had the tire fixed and was off in pursuit.

I got to within 3min of Jeff and Chris before I hit the final 3 climbs in the last 20 miles, then the chase was pretty much over. I buried my head and pushed on a steady pace all the way to the end to finish up in 4th. Other than the tire, which was a bummer, it was a clean race and I was pleased with the performance. The form is good, and I still have another 5lbs I think I can shave off my carcass before Mohican and Lumberjack. Congrats goes out to fellow Michigan rider Christian Tanguy for a strong ride. It’s kind of ironic that he and I only live 10 miles from each other. The Superfly was a great tool for the job. The new frame is a big improvement over the first generations. The Ergon grips kept my hands happy the whole 7hrs, and the Notubes Crest 29er wheels stayed TRUE to their reputation as FAST wheels. Thanks for reading!
Posted by simonster at 6:31 AM 4 comments: