Sorry for the late post. This past weekend was round two of the Midwest Tripple Crown, the Chequamegon. Every year I seem to do great in round one at Ore to Shore, and every year I show up in Hayward WI with hopes of pulling off something special at Chequamegon. This year was more or less the same.
The Chequamegon is a difficult race. Not only are the constant up and down hills relentless, but you’ve also got to be quite a crafty bike rider. Knowledge and understanding of the course and the flow of the lead pack are crucial… especially at the start. Unfortunately, this is where I made my mistake. The pack of 1500 amateurs rolls down HWY 71 at warp speeds with the aid of a draft from a 4 wheeler. This year there was a tailwind which aided the speeds.
A lot of things go through my mind during this frantic scrum. Is someone going to bite it right in front of me doing 40mph? Will I be hurled to the pavement as a wheel crosses up with mine? Will I die? Will I break my neck? How bad will my road rash be? How much repair will my bike need after 1500 people roll over it? All these things roam around in my head as I attempt to risk life and limb to be in the top ten as we hit Rosies Field. One must ask themselves… is it really worth it? Apparently I didn’t think so this year as I let 200 people beat me to Rosies Field.
I had good legs though. I felt strong. I immediately went to work and started passing people. I came within 10s of the lead group, but just couldn’t seem to close the gap down. I was frustrated and wanted to quit right as we crossed HWY 00 at mile 15. I knew I wouldn’t be racing for the win. I quickly slowed up and formed a chase group. We worked together pretty well. The course was wet and you had to be careful to get around the mud puddles. My motivation was pretty low and I didn’t really feel like racing anymore.
However, people out on the course would periodically shout out our positions. I heard 19th, then I heard 15th, then I heard 13th. I started getting excited again at a shot for the top 10. Sure enough we picked up a few stragglers and the stage was set for a top 10 finish. I attacked as hard as I could coming into the last XC ski trail. I looked back and I instantly had a gap. I was lucky enough to even pick off Marko, and Chris Peariso right near the line. I apologize for that. I rolled in 9th, my best Cheq 40 finish ever. Even better was Michigan’s own Mike Anderson who ended up 4th. He also coincidentally traveled to the race with us. Last time I teach a young kid the tricks of the trade J No worries though, I’m proud of him. He deserved it.
Now I’m more motivated than ever to get out there and make one more push to November, then the season will officially be over. Beer and football, here I come… but first I have to get through Iceman! I can’t wait. It’s going to be a blast!
Posted by simonster at 10:19 AM 2 comments: 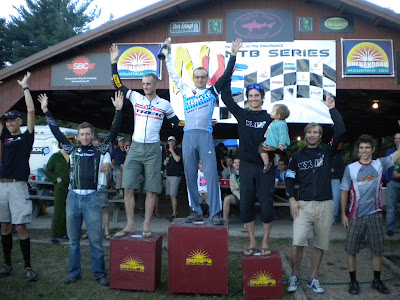 Wow… it’s hard to believe it’s September already and the final NUE 100 miler is in the books. I started training for the season in December, and it’s been going full on for 9 months… and still going. The Shenandoah 100 brought out some tough competition as well as a tough course. The weather was picture perfect and Chris Scott did an amazing job preparing the event.
I knew I had 3rd place wrapped up in the series, so my goal for this race was to have a solid finish with no mechanicals or crashes, and I almost pulled it off. I barely made the start, well actually I didn’t, but managed to jump into the group right as they crossed the iron bridge. Whoops! 6:30AM start!? We made our way up the first climb and I was sitting 4th wheel and feeling good.
Then, as we hit the steep section of the climb, Christian Tanguy was pushing the pace a little too hard for my liking as he eventually went on to win the race. Congrats to Christian, he was having an amazing day. There always seems to be a moment in a race where you make a decision about how bad you want to stay with the front group. I can’t say I didn’t want to be there, because I did, but there just felt like some sort of disconnect between my brain and my legs. I just flat out couldn’t push myself deep into the pain cave this time and I watched the leaders ride away.
I still kept it steady and was riding within myself. I joined up with a group including Tim Dickey, Chris Eatough, and Sven Neilson. We made our way up the 2nd steep singletrack climb. I was chugging right along, then snap! The chain unraveled and fell to the ground. It really took the wind out of my sails. I almost felt like pulling the plug, but Chris Eatough gave me his powerlink and encouraged me to continue. Thanks Chris! It was a pretty quick fix, but by the time I had it fixed, over 50 racers had passed me. I got to work and did the best I could to work my way through the conga line up the rest of the singletrack climb.
The descent off the mountain was pretty rough, and with the sun in our eyes, it was hard to see the trail. I must have passed 10 guys fixing flats and what not. All the downhills on the course were really rough this year, and it was really taking its toll on me. I opted for the hardtail this time, but wishing I had the full sus. I wanted to push harder on the descents, but I felt paranoid about a bad crash, or another mechanical, so I just kept gingerly picking my way down the hills.
The rest of the race, I would sort of leap frog from one group to the next. I’d push hard on the roads and the climbs, and then take it easy on the descents to make sure my bike and I would finish. Before I knew it, I was sitting in 8th just as I crested the soul crusher climb at around mile 75. I’d continue to keep the tempo up the final climb and roll in for 8th overall. Not too shabby. Barring the chain issue, it was a good performance considering where I’m at in the season. I’m glad the 100 milers are over! One more and I’m not sure my body could take it. Making the drive home to Michigan after a 100 mile race and the podium presentation is a true test of metal to one’s ability to endure great pain and suffering. We didn’t get home till 6AM! Ouch! A 26hr day.
Overall, I finished 3rd in the NUE points series which is one spot better than last year! Woohoo! I couldn’t have done it without all the great support from my sponsors Trek29, Notubes, and SRAM, and most importantly of all, my wife Mitch, who takes the brunt of a lot of the behind the scenes work. Next up is the queen of all road trips… Chequamegon. Wisconson seems so close, but yet it’s so far away. Time to rest up and rally for the push to the end of the season in November. See you out there!
Posted by simonster at 11:07 AM 3 comments: