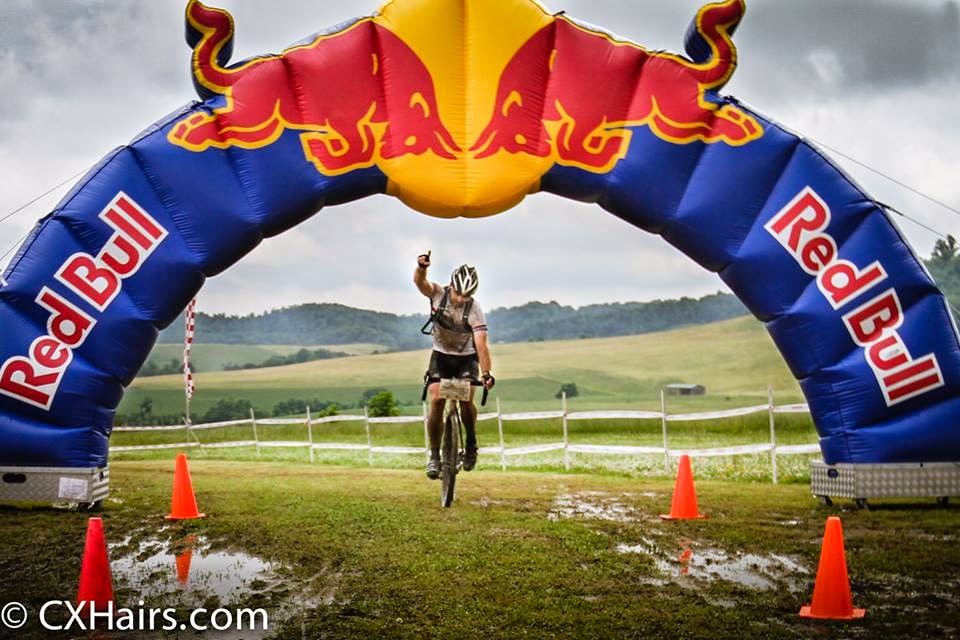 Happy Summer Solstice! Perfect time for a bike race, the best way to kick off the summer months. This year I had to make a choice between the Lumberjack 100 or the Hilly Billy Roubaix. As of lately, my passion has been switching over to the Ultra Cross events so I made the choice to go with my gut and make a run at the Hilly Billy Roubaix in Morgantown West Virginia. At 70-ish miles, and mostly roads, the Ultra CX races are much more manageable, which makes coming to work Monday morning a little easier. Last year, my Hilly Billy was soured with flat tires, so I really wanted to come back to this event and get a clean run at it. Instead of 95 degree temps like last year, we were treated with rain and mud. Not sure which one is worse, but I tend to ride better in the mud, so that was ok by me.

Towing the line were several fast dudes from all over the Eastern side of the United States. I was going to have to be vigil. We got off to a pretty quick start and by the first climb, it was already starting to whittle down. Before long we were routed into the famous mud hole section. This years mud holes were especially large. The guys on mountain bikes had an advantage here, but I managed to stay pretty close to the front only allowing a few seconds to open up. Once back onto the roads, a small group of about 15 or so formed. I’d say the CX bike was a good 2mph faster on the roads and with an 11-36 cassette on the rear, I had plenty of range to get up the steeper pitches. 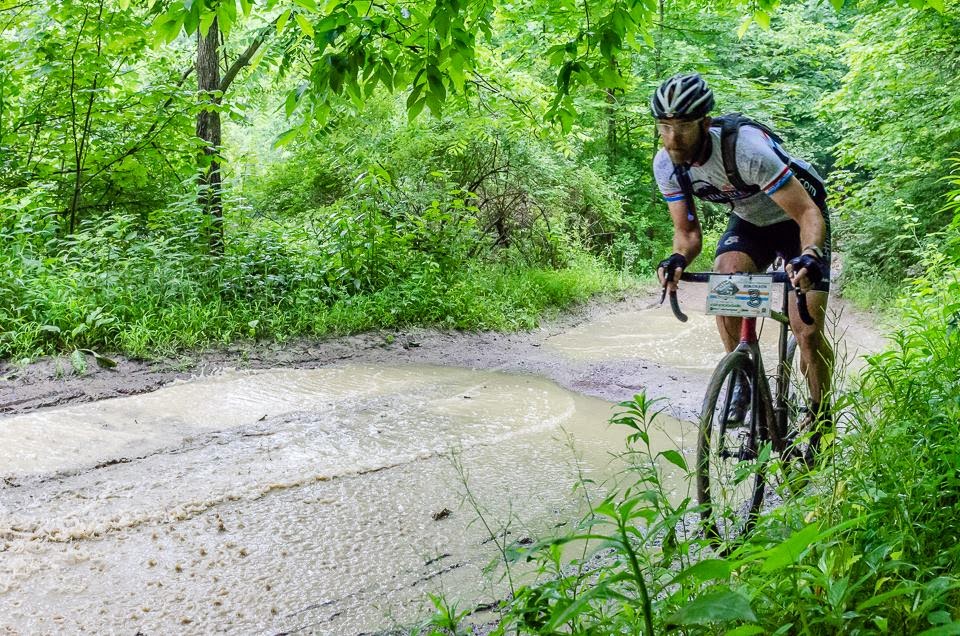 On the ensuing climb, it was Stephen Cummings pushing the pace, and I knew right away he was someone I needed to watch out for. I held his wheel as he pushed the pace and several riders trailed off. By the top, it was down to just 3 of us. It was me, Stephen Cummings, and his team mate Jared Babik. We rolled along on the roads and worked together to try and distance ourselves. By the time we made it to the top of the next climb, it was down to just Stephen and I. He was descending on the mountain bike a little better than I was, so I wasn’t sure how I was going to get away from him.


We made our way out to aid #2. Stephen and I were trading pulls but as we neared aid #2, I flicked Stephen through but gave me a sigh and said he was starting to fade. Thanks to the volunteers, we blew through aid 2, however I managed to get through the station a little quicker and I opened up a gap on the ensuing hill. I thought about waiting because 35 miles to the finish is a long way to go alone, but I wasn’t sure I’d get another chance. Like they say, if you want to win a bike race, you have to be willing to lose, so I went for it. He held close on the following descent, but by this time I was gaining much more confidence in my tires and feeling better about bombing the descents. The 38’s on the wide velocity rims pump up to a nice volume, and the steel 616 frame made descending feel butter smooth.

From this point on, it was a 35 mile time trial to the finish line. I went to work on opening up a good gap on the roads. By the time I rolled through aid 3, I could start to feel the fatigue creeping in. The climbs were becoming painful. I’ve felt this plenty of times before, and more often than not, someone catches me and I lose the race. But this race was different. I kept telling myself over and over, “quit whining and win the god dam race!” I was getting myself pumped up each time I repeated it. Each climb was getting harder, but I was keeping the cadence high and turning the gears over. I dug deep and found a place I had never been before. It hurt really bad but I was still moving fast. Normally when it hurts, I slow down. By the time I got to the last hill before the turn into the finishing venue, I looked back and didn’t see anyone. I knew I had done it. I threw it in the smallest gear and pushed through the marshy grass and up the final paved hill. I was so tired by the finish, I could only lift one arm to solute the win. 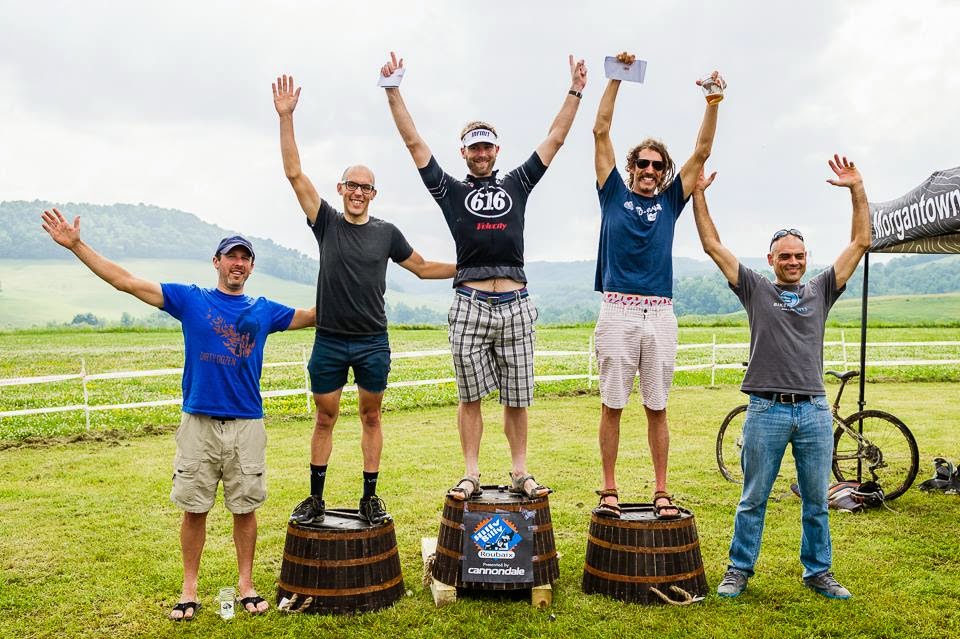 The finish line couldn’t come soon enough, but once I got there, it was truly a sweet victory. I collapsed in the chair under the finishing tent and waited for the others to arrive. It was a great moment sitting there with the other top finishers as we discussed how the race went down… the mud holes, stuff we had to run, the cramps, and the crashes. It was a great day for all of us and even though it’s hard, we all had a lot of fun out there.


I thought a lot about the race on the drive home back to Michigan and I thought about how many long drives home I’ve had over the years, but this drive was different. There were no sulking thoughts about some flat tire, or maybe a crash… No thoughts about that race that could have been. No thoughts about what I could have done better in my training. No, there’s was nothing but satisfaction. It’s a feeling we all chase in bike racing, and a feeling that only comes around very seldomly. So here’s to a great summer season for all of us and may there be many more satisfying moments to be had. Cheers! Thanks for reading and we’ll see you at the next one!
Posted by simonster at 6:55 AM

How close was the pack behind you? Did the two teammates meet back up and ride together to the finish? Or did someone else catch up to the other two... More details, you have me hooked on your blog Monster

Stephen rolled the rest of the way solo. Then Garth Prosser eventually caught and passed his team mate. We all came in around 2-3 minutes apart from eachother.

Wow is good to be back with my ex again, thank you Dr Ekpen for the help, I just want to let you know that is reading this post in case you are having issues with your lover and is leading to divorce and you don’t want the divorce, Dr Ekpen is the answer to your problem. Or you are already divorce and you still want him/her contact Dr Ekpen the spell caster now on (ekpentemple@gmail.com) and you will be clad you did