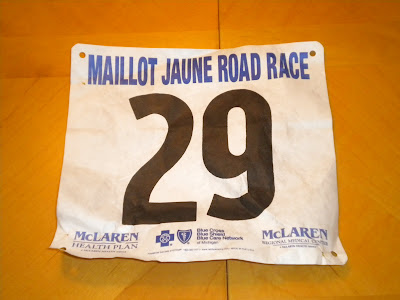 A 65 mile road race on an early Saturday morning close to home just sounded too tempting to pass up. It was the Maillot Jaune road race in Fenton MI and I'd been searching high and low for a road bike to borrow all week. It's an impressive course for Southeastern Michigan and I didn't want to miss out. The idea of riding my 29er MTB with the Cat 1/2's had been lingering as a last resort. Could I hang? The idea sounded more like a suicide mission and a sure DNF, but the workout alone would be worth the effort. I decided to try it anyways. The plan was to sit on big Ray and just survive as long as possible. I threw on my fastest set of Bontrager knobbies and prayed for the best.

So there I was, sitting on the start line with the some of fastest guys in Michigan. I'm not quite sure what they were thinking, but I assured them I was only here for the workout. We rolled off and I was quickly shuffled to the back. I was beginning to think this wasn't a very good idea. The pace surged and clumped as riders tried to get a break organized, but nothing was sticking. To my suprise, at the end of the 2nd lap I was feeling decent. In a relaxed moment in the peloton, I took a roll off the front. I actually had to go into the dirt shoulder for a moment! And that was it, the pack let me go. Riding the MTB solo off the front through the start/finish area gave me new invigoration. I could hear people saying "go Simonster"and I knew I couldn't sit up now.

Shortly after, I could see a rider storming across the gap. I slowed a bit to let him catch up. It was Greg Christian, one of Michigans strongest. He was pushing a massive gear and I latched onto his wheel. I looked back to see 2 other guys bridging the gap, and in a few moments we were a strong group of 4 riders dangling off the front. I was hanging tough, and even managed to take my pulls. But after a couple laps with the break, I was beginning to drag and I floated back to the group. Little did I know that was going to be the winning break. Maybe if I would have just sat on and relaxed, I could have survived? Ahh well, that's racing.

Things were going well back in the group. The pace slowed significantly and I was able to recover on the last lap. One more guy got off the front solo near the end. I survived a few more attacks and surges and was able to roll across the line in 13th place! I couldn't believe it! I was just hoping to sit on and make it a few laps before I got dropped. I really suprised myself by actually instigating the race and being a part of the action. What an experience.

29er mountain bikes are so light and fast these days, I'm not sure how much slower the bike may have been over a road bike. Not sure if I'll ever try a stunt like that again though. I have a feeling the roadies are going to have their eyes on me. I just might have to get a road bike. That was way too fun!
Posted by simonster at 4:43 AM 2 comments: 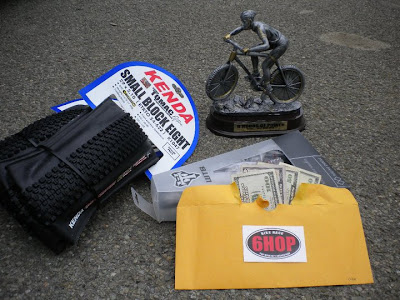 Nabbed the solo win, and the overall at the 6hrs of power in Ellicotteville New York last weekend. Course was in great shape. Total East Coast style with lots of climbing, rocks, and roots. Wonderful event and worth the trip! I highly recommend adding it to your calendar.

Posted by simonster at 8:51 AM No comments: