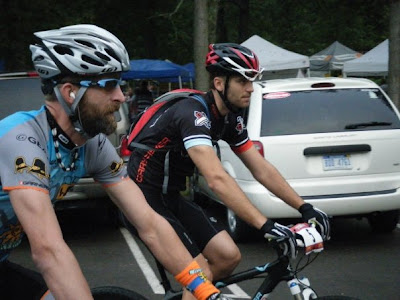 Four 25 mile laps of Northern Michigan singletrack is no small challenge. Me, and 299 others would find that out this past Saturday. My wife Michelle, my mother and father in-law, and I made the voyage up to the Manistee National forest in style as we piled into the luxurious motorhome. The weather was fair, and the rain we had the night before the race actually helped the trail conditions. Missing this year was the epic "swamp", but I was OK with that. 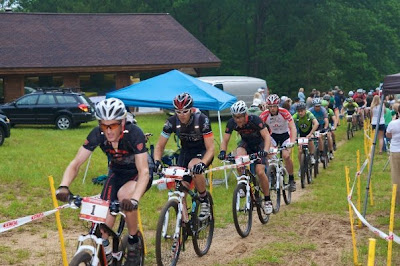 After the long roll up Udell Hills rd, we found the start line, and after a long roll down Udell Hills Rd, I found myself tucked in 3rd wheel right behind Jeff Schalk going up the first climb. My legs felt great and everything was going smooth on the 1st lap. Chris Eatough made a move at the end of the 1st lap and the group of 4 of us was brought out. Jeff Schalk, Chris Eatough, Christian Tanguy, and I would ride together for the entire 2nd lap. It was very humid, and temps were rising, but I was still riding strong. Then at the end of the outter 17 mile loop, I could feel that something just wasn't right. We hit the hill at the start of the 3rd lap, and just like that, the power shut off. My engine was overheating. I just wasn't wasn't prepared for that kind of heat and humidity!

So there I was, 50 miles into the race, all by myself to hang onto 4th position. The entire 3rd lap was a struggle. I went through the four stages of acceptance. Stage 1 is where you try to tell yourself you can bridge back up and recover after the climb. Once you realize you can't recover, stage 2 of anger and frustration settle in. After you calm down, you enter stage 3. Here you'll battle with just pulling the plug. Stage 3 is the worst part of a 100 mile race. You have to fight mental defeat, while at the same time, the fatigue hits you as you realize you're only just over half way thru. I struggled to the aid station to see my father in law Dan with an ice cold towel and my wife Michelle with fresh nutrtion. They didn't even flinch and like clockwork I found myself back out for lap #4 with new motivation. I had reached stage 4... accepting the fact that I still had a chance to take a solid 4th place and keep my good points standing in the NUE series and that I was going to fight for it to the end.

Everything was going good and I was trying to stay smooth and positive. Then the inevitable happened. Derek Graham came rolling up on my wheel. I slowed down, let him pass, then got straight back onto his wheel. I just thought I would stay with him as long as I could. Low and behold I took a few sips of Coke, and I was able to battle with him over the climbs near the end of lap 4. I managed to distance myself and roll in for 4th at 7hrs 17min. Even though I didn't get the spot on the podium I wanted, the race was a success. I silenced the inner demons on lap 3 and rallied to finish strong... not to mention I didn't crash, have any mechanicals, nor make any mistakes. My Superfly ran F L A W L E S S L Y! 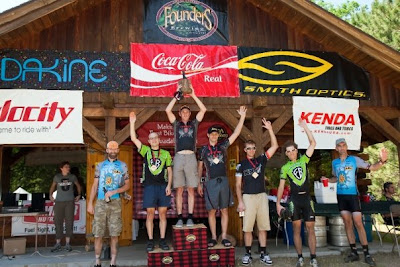 I "think" that puts me in 3rd place for the NUE series after three stops. Things are going well for 2009 so far. Not sure what's in store for July yet. I'll have to get with old Art and see what he has planned. Big thanks goes out to my in-laws for the great support!
Posted by simonster at 5:56 AM 3 comments: