August in Marquette, does it get any better? I’ve won this race 3 years in a row in 06, 07, and 08, so I knew I was going to be a marked man. As I was going through the list of pre-registered riders, I pulled out about 10 names I thought had a shot at the win. It was going to be a tough race. I decided to go with the hard tail Superfly set up rigid. It was 17.5 lbs of solid. Mitch and I arrived on Thursday afternoon just in time to pre-ride the first 30 miles of the course. There were a couple surprises and I was glad I got a chance to preview them. Friday I was able to ride the last 18 miles with Jason Lummis and I was ready. 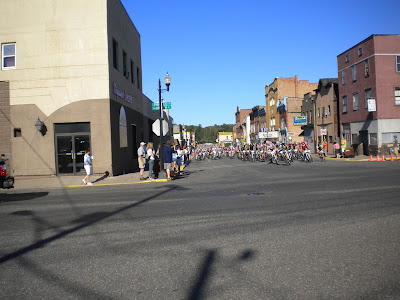 Start: The start was a bit fast and hectic. I found myself buried about 100 deep going into the railroad bed. I found a little line on the grass and quickly throttled myself to the front before we hit the Loge hill. I had a little chain issue at the base of the climb and I lost about 10 spots. It turned out to not be that big of deal although the chain problem hit me a couple times later in the race.

Sand Sector: I went to the front most of the way through the sandy two track. I didn’t want to get into trouble if someone stacked it up in a corner. Better safe than sorry.

Water Crossings: As we navigated through the two track, we rolled up onto the creek crossing. Normally this is no big deal, but this year it was deep, like swallow your whole bike deep. I knew the pallet bridge was to the right and made sure I was the first one to cross. I think we dropped a couple riders off the back there. Shortly after we hit a series of long deep mud puddles. DG drove it hard through the hub deep water, but all 8 of us made it through.

Power line Sector 1: Nathan Guerra was the first into the steep rocky pitch with me right on his heels. He and I drove the pace at the front. I was breathing hard to keep up. I knew there was a tricky little pitch in the middle, so I made sure I was the first to get to it. The line to the left was solid and I cleaned it without bobbling. We pushed on, and a group of 8 of us emerged. Me, Schouten, Matter, Lalonde, Guerra, Tanguy, TJ, and Graham.

Power line Sector 2: Things calmed down for a minute before we hit the next decisive section of the course. Nathan drove the pace up the sandy pitches and continued to push it through the lumpy mud holes, but we all stayed together.

Power line Sector 3: This includes Misery Hill, a tough loose rocky run up. I made sure to be the first to get to the base. Nathan flew around me and actually rode up a short portion at the bottom before realizing he would have to hike. Tristan Schouten quickly put his cross skills to work and had me gasping to keep pace with him. As we crested the top, we re-mounted and I put in a little attack of my own. We gapped Tanguy and Graham, and I wanted to keep the pressure on. It was all for not though as they eventually bridged back up.

Road Sector: I wasn’t sure how to handle this section. Someone has to work, but it’s beneficial to just sit on. If you’re not careful, people who mechanical’d or were dropped on Misery Hill, can bridge back up. It’s downhill to the finish and each person that latches back on will have to be dealt with in a finish line showdown. I tried a little attack, but it was quickly countered. It was more of an effort to just try and lift the pace. Tanguy took over after we crossed the bridge and did a nice job of keeping the pace up over hilly rollers.

Run into the finish: Once we get back onto the trail, it’s all downhill to the finish. I tried a little attack heading into the trail and I pushed the pace hoping someone would make a mistake. No dice, everyone was solid. Things sort of calmed down for a while once the trail leveled out and we just ran tempo. With about 10 miles to go, we hit a series of downhill pitches. I led the pace down each one and just kept hoping I could get a gap. Finally with about 8 miles to go, I snuck off the front and opened up a scant 5 second gap. I laid it on the line and went like gang busters, but I could see the group not far back. I ripped down the big sandy hill and crested Wood Chip Hill holding onto my gap. I thought I had it! My whole body was struggling. I was going flat out with everything I had, but it wasn’t enough. Just as we went under the bridge in the closing miles, they caught me. One more quick attack from TJ to shuffle the bunch, and it was going to come down to a sprint. 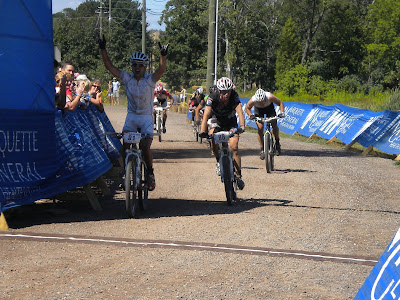 Sprint: As we hit the pavement, Nathan surged and TJ was glued to his wheel. I rallied with everything I had. Tristan got around me and Nathan going into the corner just as TJ got to the front and began opening up his sprint. I charged around the corner and hit the sketchy dirt. I almost clipped a hay bail! Out of the corner of my eye, I saw TJ raise his arms and I knew he had it. Tristan flew in for second. One more little push and I got around Nathan for third. Dang, that was a close one! 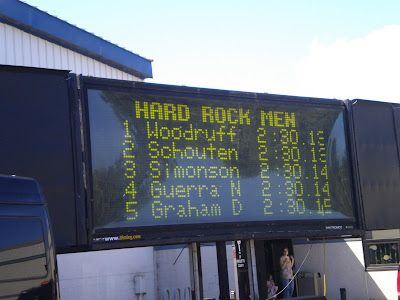 I was happy and it was a good performance. I had really good legs, perhaps too good, but to take third in such a close finish in this field was considered good luck in my book. Congrats to TJ as he moves on as the anointed one for the Triple Crown. After the race, Mitch and I went straight to the beach for a soak in Lake Superior. The weather was beautiful. Soon after we headed over to Presque Isle and jumped off the cliffs! It was good weekend. 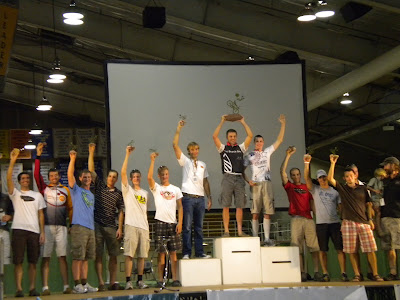 Posted by simonster at 6:37 AM

Thanks Mike, that was a suspense full account of the race. What a competition this year!