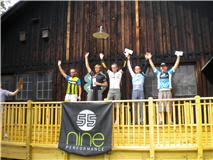 This weekends mission took us deep into the Appalachian mountains of Northern Georgia to a town called Dahlonega for the Fool’s Gold 100. It’s two 50 mile laps of fire roads and technical singletrack with lots of climbing. Rain during the night meant the trails were gonna be a muddy mess, and there was more rain in the forecast. I was kind of relieved it was going to rain, because I’d rather deal with rain than super warm and humid temps. It’s just that 4” of rain was probably a little much. I decided to ride the hardtail setup 1x10, which I think was a good decision. Other than completely toasting my brake pads, I didn’t have one mechanical issue, not even a missed shift, which is quite miraculous given my reputation of completely destroying mountain bikes.
The start of the race quickly made its way up the long fire road grind with Schalk driving the pace. I never really felt like I got into the race. I let Schalk ride away without too much of a fight. I guess I just knew it was going to be a hard day and I really just needed to focus on finishing in a solid 3rd for the NUE points series. After Schalk and Tanguy rode away, I hooked up with Harlen Price and Gerry Pflug. They drove the pace until we hit aid #1. Both of them stopped. I pushed on down the descent and shortly after Robert Marion came ripping by. I stayed with him until we hit a little tricky section of uphill singletrack we both had to run. I put some distance into him and I was feeling good. Shortly after, Harlen Price caught me, and I was content to try and ride with him and put distance on the others.
“Hey Harlen, was that aid 2?” We rolled by a blue tent, but there was nobody there. He said, “I don’t know, but we’re at mile 20 and it makes sense.” I immediately turned around and rode back up the trail to the tent. Riders had a confused look on their faces as they passed me going backwards up the trail. At the blue tent I met a volunteer with a garbage bag of bottles. I ripped through the bag, but I couldn’t find my number. I asked him where the others were at. He said, ”they’re in a truck about ½ mile down that road.” I quickly grabbed my bike and pursued the truck. I climbed into the bed of the truck and riffled through the tubs. I found my bag and I was on my way.
Once back on the course, I began to pick riders off one by one. First it was Ernesto and my home boy Dan K. Then David Wood came back to me, and finally Robert Marion. I had clawed my way back into 4th overall. At this point, it was just a battle of survival. The rain was coming down in buckets, the river crossings were knee deep, and the trails had turned into small creeks of running water. My brake pads were down to the metal and they screeched on each descent. Each time I took a drink out of my water bottle, I’d get mouth full of the grittiest dirt you can imagine. It was in my teeth, my eyes, my shorts, and my shoes. I managed to re-focused and when we hit an uphill section of singletrack, I was able to gap Robert. I continued to push on alone. The course was hard and I was beginning to feel it. Slogging through the mud just saps the energy right out of you.
I passed aid #4 with 10 miles to go and I was beginning to think the promoter was going to have to call the race at the lap. With this thought in mind, I made sure to keep the wheels turning to stay in front of the chasers. More singletrack and what seemed like an endless amount of climbing saw me at mile 50 where to my delight, the promoter said I was finished. Those last 10 miles of trail where some of the most treacherous moments in my career as a MTB’er as I went careening down the mountain with no brake pads. It was the right call to end the race. I ended up 3rd in the geared mens class, which meant I took back 3rd place in the NUE points series! I was very happy about that and it made the whole trip worth the effort regardless of the epic conditions.
Now I’ll take this next weekend off and prepare for the final NUE showdown at Shenandoah. Let’s pray for a dry course!
Posted by simonster at 6:49 AM