Marquette Michigan is one of my favorite places to visit during the summer time. Throw in a kick ass mountain bike race called the Ore to Shore and it makes the decision to visit even more enticing. We decided to take Boonen, our hyper active Golden Retriever, along for the road trip. I think he was even more excited about the trip up North than we were.


I’ve done this race quite a few times, and have even managed to win it on a few occasions, so I knew exactly what to expect. The familiar names dotted the start line and I knew it was going to be a hard race. I got off the start really well, and I could tell the legs felt good. I maintained my position right near the front all the way up to Lucey Hill where Cole House threw out an attack. I decided to lay up and let Brian Matter cover the charge, which he did, and it sent my heart rate skyrocketing. 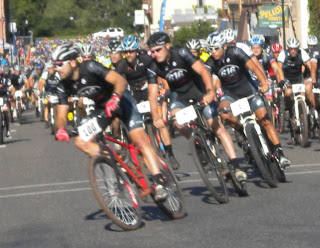 I managed to recover well, and the whole race came back together. A huge pack swelled all the way up to the first section of power lines. I went to the front, but Brian got around me and went hard through the rolling hills. I was OK with that, and I managed to stay within myself. So far, so good. The next round of punches wouldn’t come until we hit the next section of powerlines. This time, things got a little tougher, and I could feel myself struggling with the pace, but I was hanging right in there with the attacks.


In no time, we were back onto the power line trails where Brian Matter decided to go for it. He had a gap leading into misery hill… with a driving Cole House on the front determined to chase him down. We approached Misery Hill, and Cole punched it across to Brian. That was the last time we would see them. I thought it was a good idea to get back on my bike and ride the 2nd half of Misery Hill… Big Mistake. I was totally gassed and seeing stars as I got to the top.


As I fumbled through the rest of the rocky power line trails at V02max, I watched the 2nd pack of riders pull away into the distance. I kind of thought my race was over, but I pushed on and tried to recover the best I could. I thought maybe there was a chance to catch back on during the paved section.


Sure enough, Derek Graham came rolling up to aid… then shortly after that, a raging Tom Burke flew by. I grabbed Tom’s wheel. I figured there was no one better to ride the pavement with then the state road time trial champion. A few flicks of the elbow later, and we latched right back onto the 2nd group. All of a sudden, 3rd place was a possibility.


Things would sort of string out, then slow down periodically with none of the moves sticking. I rode near the front and just tried to cover, rather than attack. I figured I would save it up for one big move near the end. As we rolled up to the big sandy downhill 4 miles from the end, I saw my chance. I railed the downhill with everything I had, then tore into the Kerby woodchip hill. Just as I got to the top, Tristan Schouten, and Nathan Guerra counter attacked. It was perfect. I latched on as Tristan pulled us right along. We had a gap! This was going to work.


Tristan pulled hard all the way thru the final singletrack and right up to the woodchip trail. He abruptly sat up. I looked back and saw TJ Woodruff and Tom Burke charging at us. I knew I had to keep the pace up, or else the 3 up sprint for 3rd was going to turn into a 5 up sprint, and I aint no sprinter. I rolled thru and took over. But as we approached the finishing straight, my legs were so loaded up, I didn’t have anything left for a sprint and Tristan took the final podium spot. I would end up 5th. In hind sight, I wished I would have attacked hard when Tristan sat up, rather than just rolled thru, but it could’ve been much worse.


I went from thinking I was out of the top 10, to sprinting for 3rd. I guess it just goes to show that races are never over till you cross the finish line. After the race, we all stood around and reminisced a little. I reminded Brian, Tristan, and Cole of the times I had won, and how I couldn’t believe I rode that whole race solo one yr. It also reminded me that we’ve been at this sport for quite a while. It’s nice to see some new younger faces up near the front like my 616 team mate Jorden Wakely, and RBS team’s Ron Catlin. To cap it all off, we all partied late into the night after the race, and I got to know some of my new team mates. It was a great day.

Congrats to my team mate Cole House on the win, and everyone else who finished. Cole and Brian had some amazing fitness this year. So here’s to the UP, the Ore to Shore, fantastic friends, and everything else that makes racing in this state of Michigan so badass. Thanks for checking in.
Posted by simonster at 9:55 AM