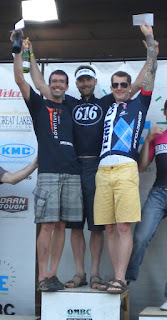 8 years ago I entered a little race up in Northern Michigan called the Lumberjack 100. It was part of this new series called the NUE, or National Ultra Endurance. I didn’t know much about it, but 100 miles on a mountain bike seemed intriguing to me. I remember racing against Chris Eatough that year, and about 40 miles in, I dehydrated, bonked, and overheated all at the same time trying to keep up with him. I had no idea what I was doing. A lot has changed since then, but I do remember vowing to come back and win one of these NUE races at some point. I have a whole cabinet full of finishers glasses to show how many times I tried.


That brings us to this past weekend down in Ohio for the Mohican 100. I have to say the Mohican 100 is one of my favorites.  It’s cash payout has grown into one of the best in the series, and the Mohican Adventures cabins is a great venue. Plus Ryan O’Dell gives out free beer all night long after the race. What more do you need?


The beginning of the race started out pretty fast with the 100k racers pressing the pace right off the gun. I did manage to sprint for the hill climb prime at the start and pick up $200 thanks to the Loudonville Chamber of Commerce and Kim’s Bikes. From there the pace didn’t let up as we wound through the campground. There’s quite a few short steep climbs before we get to the actual Mohican singletrack. It strings the field out nicely, but it’s a lot of effort to put out, especially when you know you have 98 miles to go.


We weaved our way through the singletrack and a group of 3 formed, Rob Spreng, Kevin Carter, and me. I almost crashed and was able to save it, so I was happy just to follow. But as soon as we rolled under the covered bridge, I decided to give them a test on the ensuing singletrack climb. To my surprise, I opened a little gap, and by the top, I was out of site. I thought, “well here we go… this is it! GO GO GO!” I hit the run up at the end of the singletrack and I really dug deep to outright sprint up that thing. I knew that would stretch the gap out enough to be fully out of site on the dirt rd sections. Out of site, out of mind, as they always say.


From that point on, I went into time trial mode out on the roads. I kept telling myself “GO GO GO, don’t look back!” Getting through the trails at Mohican Wilderness was a little sketchy, but I managed fine. I was a little concerned about the 38t front chainring on the XX1 kit, but I was able to force it up all the steeper climbs.


I was happy to get back out onto the roads and onto the rail trail and still be out of site. The rail trail has this aweful false grade to it, and the soil was kind of mushy. It was like riding on flat tires. The heat and humidity was starting to pick up and I could feel my body starting to strain. “uh oh” I thought, “Here we go.” I pressed on through aid 4 and picked up some ice and a couple fresh bottles of infinit. I knew there were about 3 or 4 steep climbs from aid 4 to 5 and I was not looking forward to them. Just as I was rolling into the last road climb, I looked back and saw Gerry Pflug gaining on me. Sure enough, he caught and passed me by the top. I didn’t have much left in the tank to chase, but I tried. Gerry was on a single speed and I knew I was still first in the mens open as long as I could keep the wheels from falling off. Seems like Gerry and I have had this little game going on for years where I get way ahead in the beginning and somehow he catches and passes me right at the end. Must take him a while to get warmed up. I rolled into the final singletrack pretty much spent. Another hop skip and a jump with no one yet in my rear view and I found myself crossing the finish line for my first ever NUE mens open win! Rob Spreng and Chris Peariso rounded out the mens open podium. Even though Gerry got the overall, I was still really happy to climb on the top step and spray the champagne.


It’s been a long battle. Every time I thought I had one in the bag, something would happen. A flat tire, a broken chain, a bonk, I can even say I was out there breaking my neck trying to get a win.  But if there’s one thing I’ve learned about racing, it’s that it requires a great deal of patience. People, sponsors, and even my own psyche, are quick to write it off if the results aren’t coming. I was beginning to think I didn’t have what it took. I started to think I was getting too old. I started to think I was slow. Well screw all that. Believe in yourself. Determination, persistence, and a will to work hard will eventually pay off… even if it takes 8yrs of trying. That’s why I love this sport so dam much. If it was easy, the up times just wouldn’t feel as good.


Congrats to everyone who finished, and congrats to Gerry doing it on the singlespeed for the overall. That’s not an easy task! And thanks to all my sponsors who were there to share the experience. My 616 bike ran flawless, and the infinit nutrition had me dialed. We still have quite a bit of season to go, and I hope to keep the fitness going. Thanks for reading.
Posted by simonster at 11:40 AM