After a great weekend last week, I was really hoping to oepn it up and give the legs a real test this weekend. The weather however, had other plans. We pulled into the venue Saturday morning just in time for the rain to start coming down. And did it ever! It just never stopped! The legs felt good during the short wet warm-up and I decided to try and go for it at the start. After a short delay over duck tape, the race was underway. I managed to work my way to the front heading into the trail. Not exactly where I wanted to be, but better than being burried in the pack. Shortly after, Cole House and several others flew around me, as I found myself struggling to keep the bike upright through the corners. ﻿ 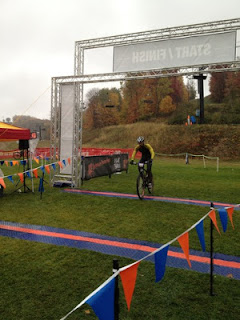 It wasn't long after where I found myself off the back of the front group. They were just railing the corners way faster than I wanted to. It was hard to see too, and the mud was flinging everywhere. It was like a slip and slide, and I just couldn't seem to stay off the brakes and let the bike roll. Once we got to the more open sections of the course, I felt a lot better and started working way around some people up the ski hill. 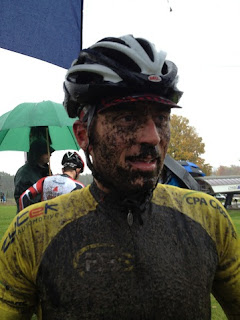 The race was completely blown apart. People were dropping out, and I had no idea what place I was in. I kept hammering the best I could, but was still really struggling in the corners. Finally, right near the end of the 2nd lap, I managed to catch Scott Hoffner, and my team mate Ron Catlin going up the ski hill. Just at that time I heard word that they were cutting the race short. It was a little bitter sweet as I was actually looking forward to making more ground on the 3rd lap. Oh well, it was the right call to end the race. The brake pads were almost gone and the course was getting hazardous. ﻿ 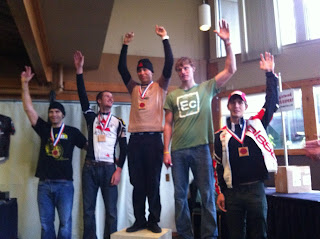 I put the power down up the ski hill and slipped and slid back down to take 5th just ahead of Scott Hoffner. I was happy that. I did the best I could, given the circumstances. I felt like I couldn't really get a good gage on my fitness because my handling held me back, instead of my legs. To lose 4-5 minutes on the same guys I'll be racing in 3 weeks is a little discouraging, but it is what it is. I just have to hope the Iceman course isn't the same conditions. Congrats to the guys up front. They rocked it out on that mess and deserved the podium.

I have to give huge props to Dan "superman" O'Dea for driving up our spare set of keys to the minivan. Apparently people like to snatch gloves up that aren't theirs and hopefully they'll realize how much of jerk move that was when they find our car keys in them. But karma has a way of sorting that out, that's all I'm going to say.

Hope to see all of you next weekend at Mad Anthony... and lets pray the weather is good this time.  ﻿
Posted by simonster at 9:34 AM

Monster you know how it goes, if you're not comfortable on your bike you can't judge that performance fairly... Next time in those same conditions your confidence will be there and then you can critique yourself :-)