This past weekend took us to the West side of Michigan for the first race of the year, Barry Roubaix, starting from Yankee Springs Rec. Balmy temps were on tap which saw most racers in just shorts and a jersey. The rain from the night before left the course in surprisingly good condition. It was soggy in some places, but for the most part, it was fast. I knew my fitness was much better this time from last year. I think I got on the scale last year the day before the race and clocked in at 192… this year I was a svelte 180, 12 lbs lighter! So just the weight reduction was going to make huge difference.

The action got going right away. I kind of thought the lead into Sager Lake Road, the first sandy 2 track about 3 miles in, was going to be elbow banging mayhem with so many racers this year. But it seemed everyone behaved and we all trickled in with no problems. I think I was top 5 when someone attacked and I was gapped off the front of the race. I struggled and chased, and by the time we were back onto the dirt rds, I had made it back on. It took quite an effort and I just wasn’t recovered enough to stay at the front. The 39t chainring up front didn’t help much either. Wish I had a 44. From there I floated back and hung onto the next group. Dan Korienek and I took turns attacking, but nobody was letting us go. I probably did too much work, but it really didn’t bother me because I still wanted to get in a hard workout. About 40 miles in, we caught up to the group that had gotton away earlier, but alas, the top 5 were still up the road. So we played cat and mouse, until we got to the final sandy 2 track section. I went as hard as I could, and Dan and I took turns attacking trying to blow it up the best we could. We swung back onto the pavement and I dug in as hard as I could. At the top a group of 4 emerged, me, Dan, Ernesto, and Adam York. We traded pulls to get away until we reached the finishing straight. Dan lit it up in the sprint… I didn’t even try. I’m surprised he didn’t rip the crankarms off his mountain bike! I rolled happy and spent for 9th.

First race of the year, and I got what I wanted out of it, a good hard 62 miles of hilly dirt rds, and a nice tune up for the first round of NUE’s. The legs felt good. It’s very hard for me to keep the anaerobic endurance up for these shorter punchier events while training for the 100 milers at the same time. Perhaps in the fall, I can work a little more on that. Next up is the Lowell 50, another hard dirt road race to tune up the fitness before Cohutta. See you there! 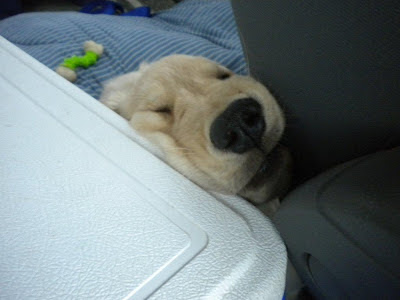 Boonen after his first bike race of the year.
Posted by simonster at 7:54 AM